The following story was written in a very short time after reading one of the amazing comics on the Heroes TV series web site. 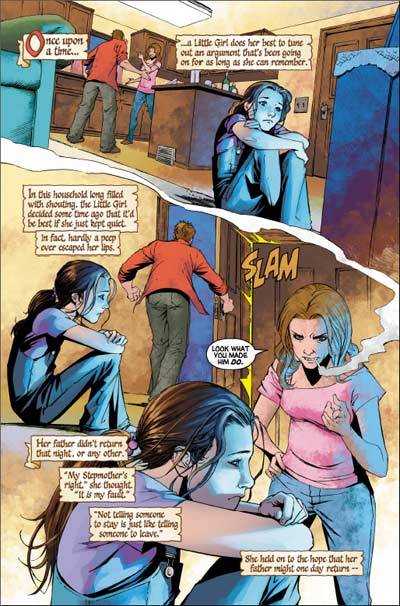 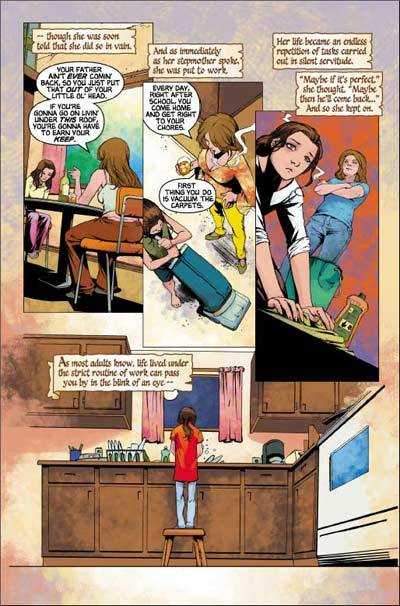 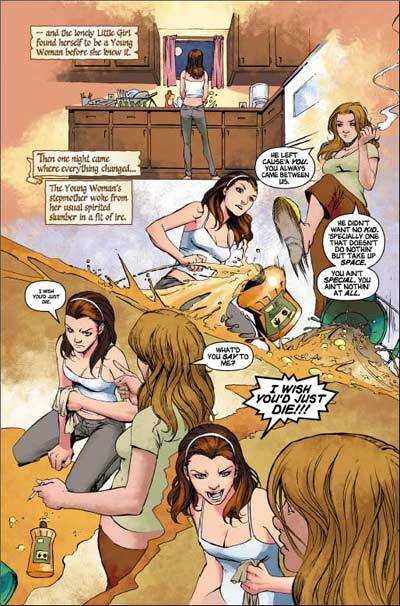 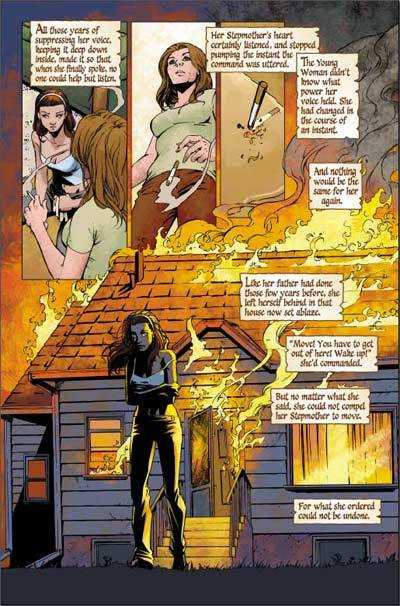 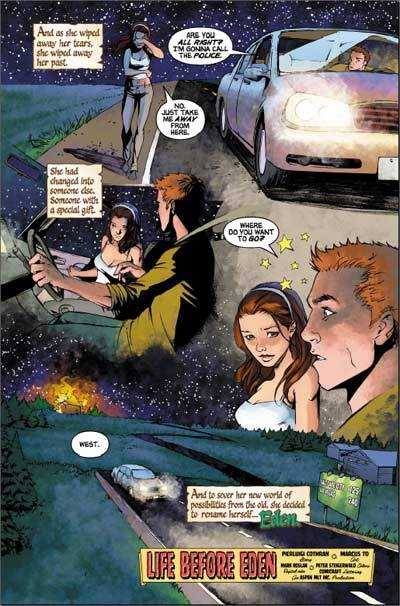 “My God, every people can’t avoid to grant all my wishes!”.

Eden couldn’t realize the full potential of her unexpected power yet. Totally unused to give orders, after years as slave of her own stepmother, she initially cruised town by town with no precise destination.

Obtaining food, hotel rooms, new clothes and serviceable chauffeurs was as simple as saying “I’d like…” Eden’s journey throughout the Midwest was comfortable and very interesting, even because she had never left Tennessee before.

One day she looked at the truck driver who was bringing her across Arizona, and she suddenly realized he was probably losing her job because of her. “Let me get off, and go back to your deliveries” she said. Alone in the middle of a desert, she walked for some minutes and enjoyed that absolute silence.

Then she saw it: a beautiful wild mustang. Pretty small but very muscular and well-proportioned, it didn’t appear friendly but let Eden come close. She caressed its mouth and said: “So you should be a wild horse, the untameable kind used in rodeos! I’ve taken some pony riding lessons when I was a little girl, and I wish I could ride real horses someday… but I couldn’t anymore, so now I wouldn’t be able even to mount on your back!” The horse moved its head towards her feet, then sprawled over the ground. “Wow… do you mean?…”

They stopped at a shop, whose owner gave Eden a beautiful cowgirl outfit, including riding boots with spurs, saddle, bite, bridles and reins. Everything for free, of course: she had just said “Wow!” while watching a picture with a young cowgirl…

“Now we’re gonna make it seriously, my little slave!” she said to the horse, that let the astonished shop owner saddle its back: that was a wild mustang! Eden horseback journey could continue in a more comfortable way. She took confidence with the reins and started using her spurs and crop, initially with care but soon with less mercy. She really enjoyed it: that living being was totally in her service, and she rewarded it with cruelty and pain! So exciting!! The oppression suffered for all those years must have turned Eden into a sadistic!

She kept riding the horse for several hours at full gallop beside the road, until it was completely exhausted. Then she saw a couple of policemen far away, who were chatting beside their pick-up while waiting for car drivers to check. “I want you to use every remaining particle of your strenght to carry me there” Eden said, spurring the horse flanks with an evil smile.

She dismounted and smiled to the cops. “You, unsaddle my horse and let it go” she said to the male cop “Put the saddle and all the housing into the truck.” Then she looked at the mustang: “Thanks, my friend. I really enjoyed dominating you. You can go back to your wild life, but I want you to be exactly here every Monday at noon… just in case I’ll be eager to ride you again.”

“Now, you!” she shouted against the female cop “I’m sure you’re willing to be my next chauffeur.” They left one minute later. Eden soon noticed how cute the policewoman was: brunette, about 30 years old, she appeared sexy and flourishing. Her name was Jennifer. Almost 19, Eden had never seriously thought about sex: she hadn’t been feeling attracted by schoolmates… But this time something happened. “Am I lesbian?” she thought, while Jennifer’s tongue gently lingered between her thighs twenty minutes later…

The two women spent a hot night at a motel, just beyond the California border. Eden had never felt that way!

They slept for just a couple of hours after sex, because Eden wanted to leave soon. Jennifer was very tired but kept driving, while Eden got asleep. She woke up when they reached San Bernardino: “I’m hungry!” Jennifer plopped down onto a restaurant chair, while Eden chose a rich lunch. Once restored, they went back to the car. “Now I want you to use the police database and find my father. His name is Arthur McCain and he should live in Southern California.”

“Caught! He lives in San Clemente, CA. Married, arrested for domestic violence, but it appears his wife has withdrawn the charge.” Eden suddenly felt very sad. She made Jennifer drive to San Clemente with no breaks.

Reached the house, Eden and Jennifer were unexpectedly welcomed by the girl’s father with much kindness. His wife appeared happy and in shape, and they had a pleasant dinner.

“I’ve been so worried about you, honey! I thought you were dead in that fire!”

“How could you abandon me, Dad? You can’t imagine the nightmare I’ve been living since!”

“I’m sorry, sweetheart. I had planned to come back after a few days and take you away with me, but your stepmother knew about the bank robbery and blackmailed me: she was going to call the police unless I left you with her. I hadn’t realized she felt so attached to you!”

“Actually, she just liked having a little slave! And that’s what a coward like you would deserve to become: a slave for his entire life!”

Eden broke down and cried. She went to the bedroom that Samantha (her father’s new wife) had made ready for her, and got asleep.

The following morning, Eden was unprepared to the scene that welcomed her in the kitchen. Samantha was having a breakfast, while Arthur was on his knees under the table, licking her feet with complete devotion. “This is amazing!” Samantha said “I don’t know how you made him feel so guilty, but since what you said yesterday… he just lives to serve and worship me! He’s always been violent, selfish… you can’t imagine how many times he’s beaten me… and now he’s suddenly become the man of my dreams!”

Eden smiled in front of her laptop. “Of course I know this site… what do you think?” she thought. Her human chair slightly moved. “Amanda! You’ve got to be a more reliable chair!! I’ve been sitting on you for only half an hour! Jennifer, take care of her.” Eden stood up and walked outside, eager to spend some time in her private garden.

Jennifer, the former policewoman now become full-time Eden’s butler, looked at Amanda: pretty and thin, she was completely naked and appeared terrified because perfectly knew the punishment. Amanda had become Eden’s fourteenth slave after trying to skip a queue at the post office, line in which Eden was generously standing (renouncing for once to use her power)…

Jennifer took place on Amanda’s shoulders as she was on her hands and knees, sitting close to her neck to make it more tiring, and started hitting her back and ass with a cat-o’-nine-tails while talking to the poor slave: “You know it: Eden is a Goddess! She deserves perfect slaves, and that’s what you’re supposed to be. This month your role is chair. I know you’re pretty weak and Eden is heavier than you, but you’ve got to be perfectly still.” Amanda suffered, listened, cried… and look forward to go back to her favorite role: Eden’s personal toilet.

Eden’s mansion, perfectly managed by Jennifer, had 24/7 slaves for every function. Her life was quiet and comfortable, but she used to spend much time as volunteer in a no-profit organization, which assisted women victims of violent husbands. Using her power, Eden used to turn those men into slaves for their wives: they would spend their entire life amending that unacceptable violence.

After the fiftieth lash, Jennifer stood up from the exhausted and crying Amanda. “Now you can try to influence my choice about your next month role” she said with an evil smile. Amanda immediately got on her knees and put her mouth under her torturer’s skirt. Jennifer had a lot of piss and didn’t even try to make it slowly, but Amanda swallowed every single drop. She was such a natural for that task! Jennifer smiled again, satisfied, and looked outside the window: Eden was riding Steven, the human pony she had recently enslaved.

One month before, Steven had fallen in love with Eden. He was a handsome guy and had courted her in a very kind way, but Eden was definitely lesbian! Nonetheless Steven, once realized it, had said he was ready to play any role she wanted just to stay with her. This statement had broken Eden’s last hesitations: “I wish you become my devoted full-time slave!” she had said.

Eden hit Steven’s abdomen twice with her spurs. He gained speed and made a perfect jump: his rider was having fun on his shoulders along a small training circuit built in her huge garden. Eden was beautiful in her favorite riding outfit, the one she had used with the wild mustang during her first days as a free woman. “Very good pony! We’ve completed twenty perfect laps. Now I want you on all fours”. Steven stopped, following the rough command Eden gave him by pulling the reins. He knelt down, so his Goddess could dismount. Of course Eden didn’t put her favorite boots on the ground, but trampled the stomach and breasts of her slave Lisa, whose current role was “on-the-go carpet”. Jennifer immediately arrived and prepared Steven for the next session: she took away the shoulder saddle and put a larger one onto his back, gave him knee-pads and gloves, shortened the reins. After just a couple of minutes, Eden could heavily mount on her 4-legged ponyboy. She whipped his nape with a riding crop and he immediately moved. She kept riding him for almost one hour.

A couple of hours later, Eden was having her dinner. Four different slaves were there for her comfort: Steven’s back was her chair, Lisa’s breasts a carpet for her bare feet… while Marjorie massaged her shoulders and Kate licked her feet…

Eden owned an authentic small harem of female slaves. The only men, assigned to the hardest roles, were Steven and Dave. Eden used to spend much time with Steven, whose spontaneous devotion couldn’t stop to fascinate her, while Dave was mainly managed by Jennifer for domestic duties.

A small harem, we said… but this was nothing respect to the Kingdom she was destined to create: an entire island in which men are supposed to serve women, and everybody to worship Eden as a Goddess. But this is another story…